On Nov. 16, 1915, the MDSSAR erected a monument in Charleston SC over the grave of Mordecai Gist who in August 1776 lead the Maryland Regiment under General Smallwood at the Battle of Long Island during the centennial year of the first George Washington Monument (located in Baltimore). For more information about Gen. Mordecai Gist see this article (link is external).

To the Memory of Gen. Mordecai Gist

While in command of the First Maryland Battalion, he so valiantly covered the retreat of the American forces at the Battle of Long Island Aug. 1776 that his troops became known as "The Bayonets of the Revolution"

A tribute from the Maryland Society Sons of the American Revolution 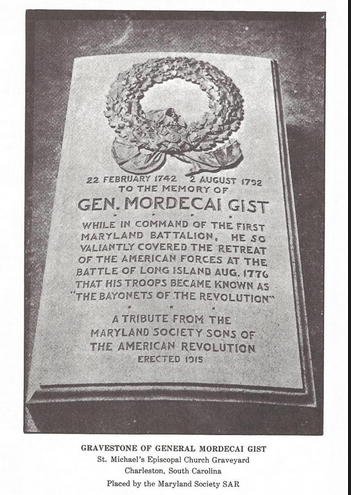