This page is for the Col. John Eager Howard Chapter of the Maryland Society Sons of the American Revolution covering the Baltimore City area. All descendants of heroes of the Revolution are welcomed.

John Eager Howard (June 4, 1752 – October 12, 1827) was an American soldier and politician from Maryland. He was elected as governor of the state in 1788 and served three one-year terms. He also was elected to the Continental Congress, the Congress of the United States and the U.S. Senate. In the 1816 presidential election, Howard received 22 electoral votes for vice president on the Federalist Party ticket with Rufus King. The ticket lost in a landslide.

Howard County, Maryland, is named for him, along with Eager Street and Howard Street in Baltimore.

Commissioned a captain at the beginning of the American Revolutionary War (1775–1783), Howard rose in 1777 to the rank of colonel in the Maryland Line of the Continental Army,[1] fighting in the Battle of White Plains in New York State in 1776 and in the Battle of Monmouth in New Jersey in 1778. He was awarded a silver medal by the Confederation Congress for his leadership at the 1781 Battle of Cowpens in South Carolina, during which he commanded the 2nd Maryland Regiment, Continental Army. In September 1781, he was wounded in a bayonet charge at the Battle of Eutaw Springs in South Carolina. Southern Army commander Maj. Gen. Nathanael Greene wrote that Howard was "as good an officer as the world affords. He has great ability and the best disposition to promote the service.… He deserves a statue of gold."

At the conclusion of the war, Colonel Howard was admitted as an original member of The Society of the Cincinnati in the state of Maryland when it was established in 1783. He went on to serve as the vice president (1795–1804) and president of the Maryland Society (1804–1827), serving in the latter capacity until his death. 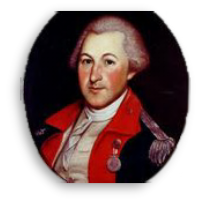