The Col. Nicholas Ruxton Moore Chapter is a chapter of the Maryland Society of the Sons of the American Revolution serving Baltimore County.

Born near Baltimore in the Province of Maryland, Moore attended the common schools. He served as a member of Gist's Baltimore Independent Cadets and served throughout the greater part of the Revolutionary War, attaining the rank of captain. He served as the commander of the Baltimore Light Dragoons during the conflict. While in service, Moore wrote to George Washington to request an acceptance of his resignation from the Army; George Washington, through a letter written by James McHenry, granted permission for Moore to resign provided he had all his accounts settled with his regiment. He also took an active part in the suppression of the Whiskey Insurrection in 1794.

In 1794, Moore purchased a property north of Baltimore known as "Bosley's Adventure", a farm containing 350-acres located just north of the modern Lake Roland. The area in which his property was located is generally referred to as Ruxton-Riderwood, Maryland.

Moore served as a member of the Maryland House of Delegates in 1801 and 1802. In 1803 he was elected as a Democratic-Republican to the Eighth and to the three succeeding Congresses, serving from March 4, 1803 to March 3, 1811. During that time, he served as an at-large delegate from 1803-1807 and represented the 5th district from 1807-1811. In Congress, he served as chairman of the Committee on Accounts (Tenth and Eleventh Congresses). He was an unsuccessful candidate for reelection to the Twelfth Congress. Moore was later appointed lieutenant colonel commandant of the sixth regimental cavalry district of Maryland on February 20, 1812.

In 1812, Moore was elected to the Thirteenth and Fourteenth Congresses and served from March 4, 1813, until his resignation in 1815 before the convening of the Fourteenth Congress. He again served as chairman of the Committee on Accounts (Thirteenth Congress). He died in Baltimore, and is interred in a private cemetery near Ruxton, Maryland. He was survived by his wife and four children.

NOTICE - Images of Nicholas Ruxton Moore and his Sword are Reproduced by permission of The Society of the Cincinnati, Washington, D.C. 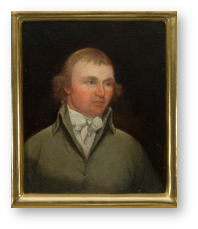